From the tall South Tower, the Suffolk Christian Church digital carillon chimes the hour and plays music seven days a week. Monday through Saturday the hour chimes 9 am to 9 pm and music plays one minute after the canonical hours of 9 am, noon, 3 pm, and 6 pm, plus 5 pm daily. Following live and programmed music after the 11 am Sunday worship service, the carillon follows the weekday schedule from 1 pm to 9 pm.

The 61-note electronic instrument was made possible through a bequest of Annie Maude and Clarence “Red” Jones and donors to the SCC Memorial Fund. Manufactured by the Verdin Company, the electronic carillon includes a keyboard for playing live and recording new hymns and songs for future performance. Although this instrument does not meet the definition of a carillon — an instrument of 23 or more tuned cast bells that allows for expression by variation of touch – it is a musical instrument whose music is integral to the cityscape of Downtown Suffolk. 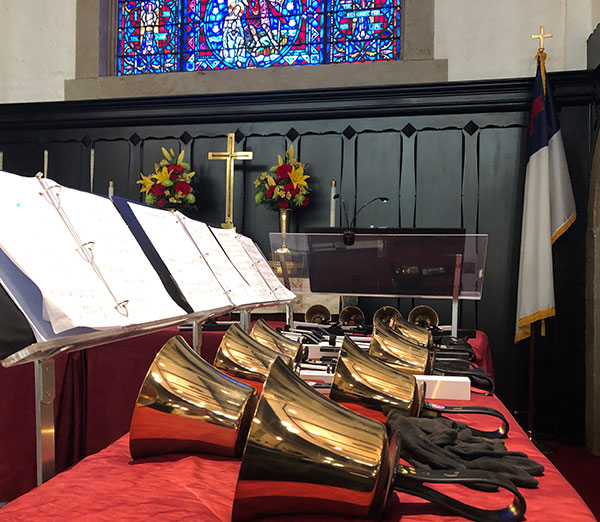 The lowest bell sound, called the bourdon bell, plays a low C on the equivalent of a 37,000-lb cast bell. The highest note, also a C, is played on equivalent of a 12-lb bell.

The bronze bells of a carillon are tuned to a note on the diatonic scale as a result of the size, shape, and lathing of the finished bell. This results in a complex sound for each bell that is self -harmonizing. When struck, the bell sounds the intended note plus a minor third above, a fifth above, and an octave above. The initial sound includes a cluster of notes around the upper octave note that quickly decay. One octave below the intended note is a hum tone. The pronounced minor-third naturally gives the bell a sound different from most other instruments. It may even sound “out of tune”; however, the sounds are correct for a bell instrument. Carillonneurs (those who play instruments of 23 or more bells) typically play one to four at a time.

Because unlike most other instruments, the bells do not dampen and the notes continue to sound until the bell stops vibrating on its own, thus the player must limit the number of notes struck at a time to create a pleasing sound of melody and harmony. The manual keyboard permits some expression by variation of touch.

The fourth quarter of the Westminster Quarters chimes daily just before the hours of 9 am to 9 pm (except Sundays when they start at 1 pm) with the count sounding on the hour. Songs of the liturgical season play automatically at 9:01 am, 12:01 pm, 3:01 pm, 5:01 pm, and 6:01 pm. General hymns play during Ordinary Time (the season after Epiphany and Pentecost).

The selection of songs is randomly selected from a seasonal “library” of songs. Seasonal hymns begin the new church year at Advent, followed by Christmas carols starting Christmas Eve. The Christmas season lasts 12 days until Epiphany. On January 6th carols and hymns related to the message of Epiphany play until the first Sunday in Ordinary Time. Lenten hymns begin Ash Wednesday and continue until Palm Sunday. Holy Week hymns play until Good Friday at noon when the bells are silent. The bells resume a jubilant celebration of the Resurrection of Our Lord with the Easter Vigil the evening of Holy Saturday. For the next 50 Days Easter hymns play. Orthodox Easter is marked with a zvon, a rhythmic pattern of bells pealed at Russian Orthodox churches. On the 40th day after Easter, Ascension hymns play until the next Sunday, Ascension Sunday. On and for the week following Pentecost (50th day after Easter) the hymns celebrate the Holy Spirit and the birth of the Church. One week after Pentecost is Trinity Sunday and hymns related to the Triune God play for the next week, the start of Ordinary time. General hymns play until the end of the church year, the last Sunday before Advent, celebrated as Christ the King Sunday.

Special days for music include sacred and civil holidays and the change of seasons. The service hymns (those songs related to the commemoration or celebration of the day) are typically heard at noon, but may affect the choice of songs throughout the day’s schedule. Rather than pulled from a seasonal library, these may override the season and are selected for the day. Many of these days are listed below. In SCC’s tradition of ecumenicalism and unity, this list includes holy days commemorated by many faith communities. The church year begins with Advent, four Sundays preceding Christmas.

The carillon celebrates other special seasons including the Olympics, visits by delegations from our sister cities of Suffolk, England and Oderzo, Italy, astronomical events, the change of seasons, parades, and anything else that seems appropriate or even humorous. It also tolls for funerals and peals for weddings.

Most of the songs are recordings made by the Verdin Company. These are recordings of individual cast bells played that are played back to create songs recorded by Verdin’s musicians or at the church. Many have been added by the chimes master, Sean C. Bilby, and by other church musicians including pianist Carmen Halley, organist Mary Huber, and other members including Matthew Bradshaw. Musicians also play the carillon live using the keyboard. 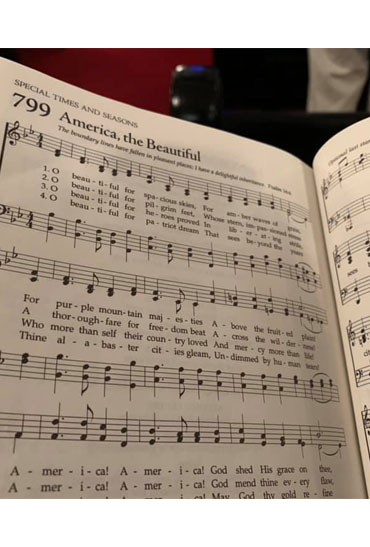 Suffolk Christian Church had two previous electric carillon systems installed, both manufactured by Schulmerich Carillons, Inc. of Sellersville, Pennsylvania. The first was presented Christmas 1963 by Emmett H. Rawles in memory of his uncle, Judge Richard Henry Rawles (1830-1919). This system was innovative because in an electric unit, about the size of a short telephone booth, solenoids (metal hammers) struck tiny bronze bars to create barely audible notes. The unit amplified the sounds through speakers in the tower so that they imitated full-sized bronze bells.

Emmett H. Rawles, Jr. gave a new electronic Schulmerich carillon in memory of Emmet H. Rawles and Katherine H. Rawles in 1993. This instrument used recordings of bell sounds rather than solenoids. It tolled the hours and played hymns at 9 am, noon, 3 pm, and 6 pm. Although the first instrument may have also had one, we know that the second carillon came equipped with a small keyboard and was occasionally played manually. A keyboard was once part of the organ console and a second amplifier and speaker in the organ pipe chamber allowed it to sound in the sanctuary. After the organ’s renovation in 2002, the keyboard became independent and was occasionally used at Christmas and after Sunday services. The speaker in the sanctuary is still operable and is used with the new instrument.

An electrical storm in April 2011 damaged the Schulmerich instrument beyond repair. Thanks to generous bequest by Annie Maude and Clarence “Red” Jones, we installed a new Verdin Singing Tower Supreme electronic carillon that first sounded Palm Sunday, April 1, 2012. This is the instrument that resounds every day in the Downtown Suffolk community.

A History of Carillons

For more on the history of carillons, visit the North American Guild of Carillonneurs website www.gcna.org.

Carillons and Similar Instruments in the Area

Here is an article that was written about the carillon in the Suffolk newspaper.